Hewlett Packard Enterprise announced today that it is acquiring privately-held software-defined infrastructure vendor SimpliVity for $650 million in cash. The deal is expected to close in the second quarter of HPE’s fiscal year 2017.

SimpliVity was started in 2009 with the goal of helping organizations build converged infrastructure that can be configured, controlled and managed 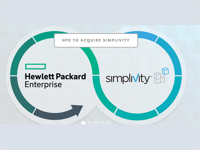 via software, otherwise known as the so-called software-defined approach.

Among SimpliVity’s products is the company’s OmniStack solution that can converge existing infrastructure such as Cisco UCS, Dell PowerEdge, Huawei FusionServer and Lenovo System x servers.

SimpliVity also has its own OmniCube hyperconverged infrastructure appliance that offers the promise of converging up to 12 core data center functions into a single 2 Rack Unit (RU) device.

At the core of SimpliVity’s solutions is the company’s OmniStack Data Virtualization Platform, which provides a virtualization layer that helps enable unified management, efficiency and data protection.

The Roadmap Ahead for SimpliVity’s OmniStack

The plan moving forward is for HPE to begin offering the SimpliVity OmniStack software for the HPE ProLiant DL380 servers within 60 days of the close of the acquisition.

“This transaction expands HPE’s software-defined capability and fits squarely within our strategy to make Hybrid IT simple for customers,” Meg Whitman, President and CEO, Hewlett Packard Enterprise, said in a statement.

In a Q&A published by HPE on the acquisition, Antonio Neri, executive vice-president and general manager of the Enterprise Group at HPE, commented that he expects the deal will accelerate HPE’s position in the fast-moving hypercoverged market.