One of the biggest challenges any IT manager faces in the normal course of operations is deciding when to upgrade to the latest version of software. This rings especially true for key components in your infrastructure like Windows Server 2016 or VMware vSphere 6.5.

Both of these products were released in the last six months and present all IT managers with the “to upgrade or not to upgrade” dilemma. For many the answer is typically driven by operational need or end-of-life support. 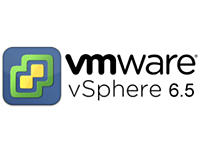 vSphere 6.5 does provide a number of new capabilities IT managers will want to investigate. One of the biggest is the new encryption options.

Security remains at the top of the risk list for every organization, and encrypted virtual machines plus encrypted vMotion is a step in the right direction. As this is the first release for this new option, you will probably find the implementation very much in the “early” stage.

An example is configuration of pieces like the Key Management Interoperability Protocol (KMIP) Server. This is a requirement in order to use VM encryption and is not provided by VMware. While a number of alternatives, including open source offerings and a Docker container do exist, they all require additional effort outside the normal installation and upgrade process.

The other big piece of this version is the release of vSphere Integrated Containers (VIC). This capability brings the world of containers as an option for VMware customers to include full compatibility with the Docker ecosystem.

One interesting point to note here is the relationship between the open source and the official release builds of VIC. Only the official release versions are supported by VMware Global Support and require a vSphere Enterprise Plus license. While this does make sense for a production environment, it could cause potential conflicts if the development environment is using the latest version and tries to push a non-supported feature to production.

The basic installation of ESXi 6.5 is the same as in previous versions. The process involves booting from the base installation ISO and answering a few questions. You should have your host system up and running in under ten minutes.

We tested this method using two HPE ProLiant Microserver Gen8 boxes. The nice thing about testing this with the HPE machines is the ability to use the virtual media option with the iLO Integrated Remote Console app (see Figure 1). We upgraded the memory in each to 16 GB with parts provided by Kingston and Crucial. VMware offers custom HPE ESXi 6.5 install images, which load the proper drivers during the installation process.

For upgrading existing systems you have two options. You can repeat the same boot process as the basic installation but choose to upgrade instead of install. Figure 2 shows what you’ll see when you choose a target disk with an existing ESXi image. For our testing we were provided with four SuperMicro SBI-7128-C6N blades, each with two Intel Xeon E5-2697 v4 processors, 256 GB of memory and six 2.5″ disk drive bays. Three of the six drive bays accommodate NVMe disks, providing a direct PCIe path for the highest performance.

This provides each blade with a single GB Ethernet port plus two 10-GB ports. This system really screams and will be our platform for testing the release version of VSAN at a later date.

The second upgrade option allows you to do an in-place upgrade for systems with access to the Internet. It will require a reboot but is the best option if you have any custom drivers installed that you wish to keep using. We also tested this option using the SuperMicro blade system with no issues.

To test performance differences we created a Windows 10 virtual machine with 1 CPU, 4096 MB of memory and a 32 GB system disk. Next we used PCMark 8 Professional Edition from Futuremark to test the basic performance of the virtual machine on one of the SuperMicro blades first under ESXi 6.0 and then using ESXi 6.5. Our tests showed 6.5 to be slightly slower than 6.0 but not by more than a few percentage points.

In versions prior to vSphere 6.0 Update 2 you would see a static Web page when you browsed to the IP address of an ESXi host machine. Now you get the familiar log in page and a Web-based management tool once you provide the proper credentials.

The HTML host management tool continues to evolve as it did when it was just a fling. At the time of this review we identified a few pieces missing that make it not fully functional.

The most glaring is the issue of creating a new VM using an ISO image of the installation media. We tried this with Windows 10 release 1607 and the wizard never gives you a chance to select an ISO file. 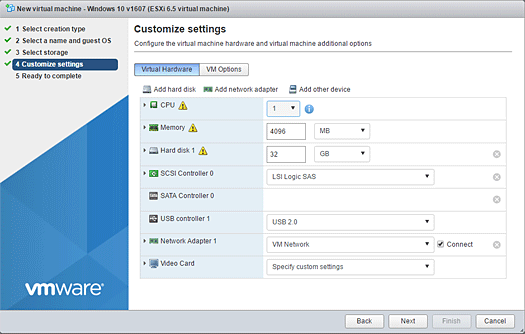 In previous releases of vSphere the vCenter Server Appliance (VCSA) was recommended primarily as an option for smaller installations. With this release VMware has promoted VCSA to a full-scale enterprise-ready application and recommends using it as the default installation choice. They’re also moving away from the Flash-based client toward HTML5. Version 6.5 offers both, as the HTML5 version doesn’t yet provide all the functionality of the Flash version. To access the HTML5 version simply enter https://192.168.1.205/ui and change the IP address to match your environment. Figure 5 shows the HTML client viewing the properties of the VSCA virtual machine while Figure 6 shows the Flash version of the same page. It is possible to edit the HTML page settings to change what is displayed in each widget, but you can’t arrange the size or arrangement. Previous versions of the vSphere Web Client required the installation of a Client Integration Plugin in order to accomplish a number of the “right-click” tasks found in the traditional Windows client. With vSphere 6.5 this plugin is no longer required.

The Flash version does allow you to adjust the size of the widget and the information displayed. Accessing the Flash version uses the same base URL with /vsphere-client as the target.

Overall, the HTML5 version feels a little snappier and definitely has a more visually appealing look. That said, we’ll have to hold out on a final judgement until the two versions reach parity.

VMware has fully adopted the use of the Application Programming Interface (API) for interacting directly with ESXi hosts and vCenter servers. Both provide an API browser that allows an authenticated user to examine the various API endpoints and see the results provided. Figure 7 shows the result of one query run against a VCSA instance. PowerCLI is VMware’s automation secret weapon, which leverages Microsoft’s PowerShell scripting language via a set of installable modules. It also comes in the form of a Docker container that you can download and use without the need to install anything.

Within the last six months Microsoft has delivered versions of PowerShell that run on Linux and macOS, providing a true cross-platform management capability. They also open sourced the whole thing and published the source code to GitHub.

VMware has taken advantage of this and implemented a wide range of PowerShell modules to automate the full vSphere ecosystem to include VMware Site Recovery Manager, vCloud Air and Director, and vRealize Operations Manager. The PowerCLI community is quite active and provides a resource where you can find scripts to meet just about any automation need.

The discussion forum has a huge contributor list with knowledgeable help for your PowerCLI questions. Best of all they offer PowerCLI free of charge!

Upgrading to vSphere 6.5 Worth the Risk?

To answer the question posed at the beginning of the review, we believe this release is worth the risk of upgrading to take advantage of the new features. We upgraded multiple systems from both ESXi 5.5 and 6.0 with zero issues. Your mileage may vary, but our experience says the risks are minimal with ample rewards.

That being said, you should take into consideration user transition concerns when moving from the legacy vSphere client to the new Web-based management tools. Many “old-school” admins know how to do what they need to do with the old client and might resist change. To be clear, upgrading to 6.5 removes the old vSphere Windows client. Older versions will connect to an ESXi host, but VWware does not support this configuration.