Taking VMware vSphere 5 for a Spin

vSphere 5.0 is the latest release of the company’s virtualization platform, and the new version contains a number of industry-leading firsts. At the core of the platform is the ESX or ESXi hypervisor, the former of which uses a custom Linux OS to handle the management functionality while ESXi does not.

VMware offers a free version of the ESXi hypervisor that they now call VMware vSphere Hypervisor (ESXi). This product was previously offered under the name VMware ESXi Single Server or simply VMware ESXi, which could easily be confused with what’s now the name for their hypervisor. That clears everything up, right?

The key here is that ESXi is the primary hypervisor for the future of the VMware platform and will be the exclusive target for all new functionality. The free version provides the basic features you’ll need to evaluate the product, albeit with some limitations such as a maximum of 32GB of physical and virtual memory and two physical CPUs. 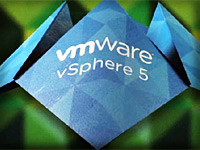 You do get unlimited cores per CPU, so that bodes well for systems like the HP DL385 G7, which has 16 cores per CPU.

There are a whole host of new features in this release of vSphere, including a few that are quite significant. On the High Availability (HA) front there’s a new HA architecture with enhanced functionality to make vSphere 5.0 systems even more reliable.

Storage is probably the area that has received the most attention in this release. vSphere 5.0’s Storage Distributed Resource Scheduler (DRS) is a new capability focused on the provisioning and maintenance of storage resources connected to a virtual machine. Storage DRS incorporates a significant number of features and functions all targeted at enhancing the allocation and management of storage resources.

Some of the new features include the ability to group similar datastores together utilizing a datastore cluster for efficient load balancing. It also provides recommendations for the initial placement of virtual disks to consider both space and I/O workloads in order to avoid potential bottlenecks at the provisioning stage.

Profile-driven storage is another addition in vSphere 5.0 and is one that offers potentially huge benefits. The key here is the efficient use of different types of storage based on either performance or service-level agreement (SLA) characteristics.

The profile-driven storage feature will either automatically allocate storage or assist the IT administrator in making intelligent decisions based on defined policies. For example, you wouldn’t want to allocate a high-performance disk to a low priority application when it would run just as well on a cheap storage array.

Underneath the storage covers is a new version of the VMware File System (VMFS). The technical details behind VMFS-5 are primarily focused on handling larger datastores (up to 64 TB) and tweaking some of the storage parameters such as sub-block sizes. New VMS-5 datastores can now handle over 100,000 files, whereas the older VMFS-3 limit was 30,720.

You do need to be aware of the limitations associated with simply upgrading an existing VMFS-3 datastore to VMFS-5 rather than migrating it (i.e. coping it). There are a number of VMware resources along with community contributed content to help you understand all the implications.

The first thing you must install in order to test the vSphere product line is an ESXi hypervisor. In fact, you’ll need to install two if you want to test any of the HA features. You’ll also need a separate storage system independent of the two ESXi host machines. For our testing we used a QNAP TS-879U-RP Turbo NAS server (see the review of this box on Enterprise Storage Forum) capable of providing both iSCSI and NFS file shares. This is important as you’ll need one or the other to configure several of the storage options.

Once you have at least one ESXi host available you’ll be able to manage it using vSphere client (see Figure 1). The next thing you’ll need to install is vCenter Server, either on a separate stand-alone machine running Windows Server 2008 or on a virtual machine running on the ESXi system.

A third option i s to download a fully-configured vCenter Server Appliance. VMware has additional downloads for vSphere Storage and vCenter Orchestrator appliances as well.

With vCenter Server installed you’ll have access to all the latest features in vSphere 5.0, including the new HA and storage functionality. We were able to get the test systems up and running with very little effort.

The depth of options available to the IT administrator can be a bit overwhelming initially, so we definitely recommend focusing on the tasks you need to accomplish. VMware also provides a comprehensive and exhaustive online documentation set with answers to all your questions.

VMware vSphere is unquestionably capable of handling the most complex virtual machine configurations you can throw at it. The new features in vSphere 5.0 bring even more flexibility to the HA and storage capabilities with an eye toward performance and scalability. It’s a definite upgrade choice for medium-to-large datacenters looking to squeeze more out of their existing infrastructure.