Server virtualization rates reached a big milestone in 2012, according to a new study from 451 Research.

The group discovered that the virtualization market arrived at a crucial tipping point last year. 451 Research’s TheInfoPro service reports that average x86 server virtualization levels have reached 51 percent, a 13 percent increase from the prior year.

x86 servers make up 80 percent of the computational capacity of those polled.  The survey, which took the pulse of midsized and large enterprises in North America and Europe, was concluded in December 2012.

The growing popularity of the cloud-enabled data center is driving demand, according to Peter ffoulkes, Research Director for Servers and Virtualization for TheInfoPro. “Server virtualization projects are still dominating IT activity, creating a one-time spending bubble as organizations lay down the foundation for a cloud-ready infrastructure,” he stated in press remarks. 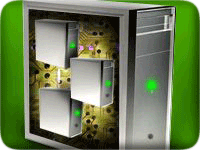 Server virtualization projects are still driving activity and spending across much of the IT marketplace, with less than a third of respondents considering their environments to be sufficiently virtualized.

In a bid to simplify their setups, IT buyers are increasingly seeking out products that combine otherwise disparate server, storage and networking components. “Complexity is driving interest in converged infrastructure solutions, with 13 percent of respondents planning to implement the technology for the first time within the next two years,” added ffoulkes.

VMware and Cisco led TheInfoPro’s customer ratings for vendors that support virtualized infrastructures. And chances are that business will remain brisk for these industry leaders, at least for the foreseeable future.

The research firm’s study indicates that less than a third of the IT professionals surveyed considered “their environments to be sufficiently virtualized.” The rest are driving IT spending as they rework their infrastructures to boost server virtualization.

There are also signs that virtualization’s newness has worn off.

IT departments are looking past base functionality and seeking software that automates management of production workloads. These include service catalogs, provisioning and service-level monitoring, said TheInfoPro.

The research also hints that as the technology becomes more firmly entrenched, skillsets are adapting in response. And not a moment too soon.

A recent survey from Quantum Corp. unearthed a disturbing statistic. Eighty-nine percent of respondents reported they experienced some level of difficulty in dealing with virtualization. Roughly 10 percent, a small minority, found it easy to manage.

What is a RADIUS Server and How Does It Work?