The HPE Apollo 4510 server provides high-density storage in a 4U chassis. It’s a part of HPE’s new push toward a composable infrastructure made up of compute and storage modules managed by the company’s HPE OneView product. These products fit nicely with the “software-defined” everything trend, especially with Windows Server 2016 as the operating system of choice.

Our review system came without an operating system installed so we decided to try out the storage version of Windows Server 2016. 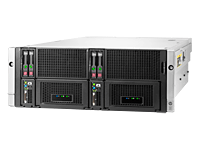 This version of Windows Server has been around for a while and was included in the 2016 release. Significant features relevant to this version include data deduplication, ReFS v2 and storage quality of service.

The entry-level Workgroup Edition provides minimal hardware support and is targeted at low-end, single CPU hardware. The Standard Edition supports two CPUs plus two virtual machines and an unlimited number of disks. This blog post from the announcement includes all the details for this release.

Four PCIe slots provide additional options for networking or GPUs. Two small form factor (SFF) drive slots on the front of the XL450 provide a RAID 1 option for use as the operating system boot drive. This leaves all of the large form factor (LFF) drives available for storage.

Storage is the real focus of this box with a total of sixty-eight LFF drive bays available. That works out to 680 TB if you use the latest 10 TB drives and 816 TB with the newer 12 TB drives. Our review unit came with ten 2TB SATA drives for testing purposes.

The folks at Western Digital were kind enough to provide four of their Ultrastar He10 Helium-filled drives for us to try out. These 10 TB drives come with either SATA or SAS interfaces and up to 12 GB/s transfer rates.

We were provided with model number HUH721010AL5200, which operates at 7200 RPM and sports a SAS 12 Gb/s interface. This model does not support self-encryption but does offer instant secure erase.

Installing Windows Storage Server 2016 went off without a hitch. We did need to update several drivers using the latest HPE Service Pack for ProLiant (SPP) package. You will need either a service contract or valid warranty in order to download the latest version.

With all updates applied we were able to use the HPE Intelligent Provisioning tool to accomplish the actual installation. This BIOS boot option will update drivers, if necessary, and insert the appropriate drivers during the installation process. 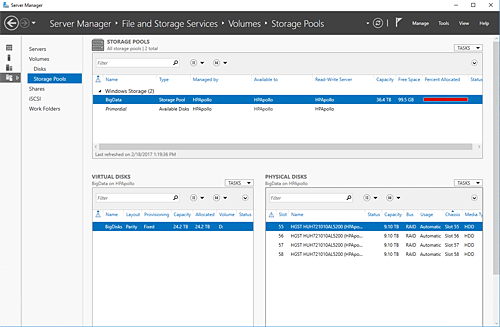 Figure 1 shows the four HGST drives configured as a single storage pool with an available capacity of 36.4 TB. We created a 24 TB virtual disk formatted using ReFS to test this feature.

One of the huge benefits of using ReFS is the amount of time required for performing basic disk operations such as formatting or rebuilding in case of a drive failure. Figure 2 shows the results of the PowerShell commands get-physicaldisk, get-storagepool and get-virtualdisk. 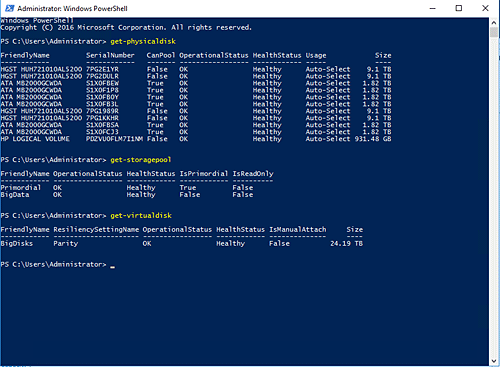 These provide essentially the same information you get from Windows Server Manager but from a command prompt. Microsoft offers both options for managing your storage resources, although PowerShell provides the opportunity to automate everything in a repeatable fashion.

When a failure does occur you will see an indication in the Server Manager File and Storage Services tab, indicated with a yellow triangle and an exclamation point (see figure 3).

We simulated a failure by pulling one of the 10 TB drives out. Once the failed drive has been replaced, the virtual disk can be repaired with the Repair-VirtualDisk PowerShell command. Another nice feature of ReFS is that this repair process can continue to run in the background while the virtual disk is in use — there’s no need to take the disk offline to repair it.

HPE has placed a huge emphasis on the concept of a composable architecture for building out your datacenter. The Apollo series of systems plays a key role in this approach, offering the flexibility needed to design around specific requirements.

Pricing on the system varies greatly depending on configuration, but expect to spend a minimum of $12,000 for an entry-level system. That being said, you’ll want to seriously consider HPE Apollo if you’re looking for an integrated compute and storage solution where you can mix and match components to meet your needs for your next datacenter project.