The promise of the Open Compute Project is to provide new standards that promote server and data center flexibility. It’s a promise that AMD wants to deliver on with its new Open 3.0 platform.

Open 3.0 was originally codenamed “Roadrunner” and is a new server motherboard approach that conforms to standards being developed by the Open Compute Project.

Suresh Gopalakrishnan explained during a keynote session at the Open Compute Summit this week that Open 3.0 is a single modular platform that can be tuned for multiple-use cases, whether its cloud, storage or high-performance computing. Gopalakrishnan defined Open 3.0 as the physical implementation of Open Compute.

According to Gopalakrishnan, the platform provides open management and no vendor lock-in.

The initial Open 3.0 motherboard is powered by a pair of AMD Opteron 6300 Series processors. The board supports up to 24 DIMM memory slots and 6 SATA connections. In terms of dimensions, the Open 3.0 motherboard measures 16″ x 16.7″ and will fit into 1U, 1.5U, 2U or 3U server chassis. 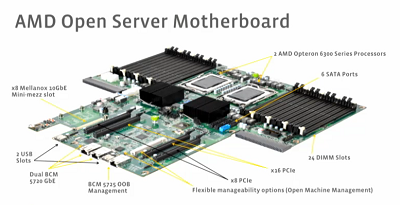 “What’s really exciting for me here is the way the Open Compute Project inspired AMD and specific consumers to collaboratively bring our ‘vanity-free’ design philosophy to a motherboard that suited their exact needs,” Frank Frankovsky, chairman of the Open Compute Foundation and VP of Hardware Design and Supply Chain at Facebook, said in a statement.

AMD is working with a number of partners, including Quanta Computer, Tyan and Penguin Computing, and expects availability of Open 3.0 servers by the end of the first quarter of 2013.

AMD’s Open 3.0 news followed some other big news from the Open Compute Summit, namely the new Common Slot specification. With the common slot architecture, the idea is to enable multiple types of CPUs to co-exist within a server.

“We are an active participant in that (Common Slot) and you will see different types of open hardware that we will help to drive to the market,” Gopalakrishnan said. “We’re very interested in how dense computing is coming together, and common slot is one approach to do that.”