Note that you first add a routing protocol, and then configure that protocol on an interface-by-interface basis. Note also that even though the screen above suggests that only RIP version 2 can be added, this option also allows you to configure interfaces using RIP 1 if desired.

By accessing the properties of RIP via the shortcut menu, you are actually configuring what are sometimes referred to as global parameters. The options here are limited, since an interface hasn’t actually been added yet, as will be discussed in a moment. The general tab controls how long a router will wait before sending a triggered update (meaning that its table has been updated), as well as RIP logging options. The Security tab is actually a little more important, since it allows you to control exactly which RIP routers this router is allowed to interact with. While the router will be able to accept announcements from all other RIP routers (running the same version) by default, you can also specify which routers it can or cannot accept announcements from explicitly by IP address, as shown below. After adding the routing protocol, you must then define the interfaces for which
this protocol is valid. This might be a permanent interface such as with
Local Areas Connections, or it might be demand-initiated connections such
as dial-up connections or VPN tunnels. The screen shot below shows the
addition of an interface to a protocol. The configuration of the interface is handled
by accessing its properties after it has been added. For any RIP
interface, there are 4 configuration tabs, including General, Security,
Neighbors, and Advanced, as shown below: The General tab allows you to control the
incoming and outgoing packet protocol allowed, an authentication string
(only valid for version 2), as well as an operation mode, where
‘Periodic update’ is the default (another option, Auto-static mode,
will be discussed in the next article). The Security tab allows you to
control actions for both incoming and outgoing routes, specifically ranges
that should be accepted or declined on this interface. This gives you a
more granular level of control over which networks this router knows
about. The Neighbors tab allows you to control how
this router interacts with other routers on the network. For example, you
can specify that broadcasts or multicast get used (as they do by default),
or you can add the specific IP addresses of other routers with whom
information should be shared via unicast traffic. Although this may seem
to be a great deal of work, it may also be a good idea from a security
perspective, especially if you are worried about rogue RIP routers being
created on your network and interfering with your routing infrastructure. 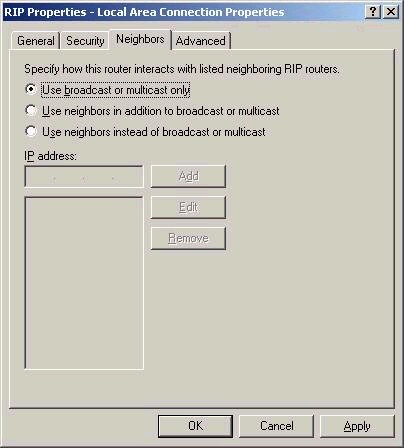 Finally, the Advanced tab allows you to control advanced RIP properties, including whether routes to individual hosts can be included in the announcement (they are not by default), intervals for announcements and route expiry (30 seconds and 180 seconds respectively by default) as well as other advanced RIP properties. While it would be worthwhile from a learning perspective to take the time go through each advanced setting individually, it is probably not necessary to know each setting in tremendous detail outside of a setup in a production environment.

As a side note, you should also recognize that if you are running NWLink, Windows 2000 can also run RIP for IPX and SAP (the Netware Service Advertising Protocol). These settings do not appear in the Routing and Remote Access interface until at least one interface is running IPX. Note the difference in my interface once NWLink is added below. That does it for yet another week. I had originally planned to try and cover
all of the routing section in a single article, but it just would have
been much too long and time didn’t permit it this week. The next article
will cover the remaining routing areas, including a look at OSPF, IGMP,
NAT, and related settings. Thanks to everyone who has been supporting the
series, especially all of you who have been making the effort to post your
question (and especially your answers!) to the message board. Best of luck
with your studies this week.