Tips and Considerations When Creating Virtual Machines in Azure

Microsoft Azure IaaS, or “Infrastructure-as-a-Service,” allows you to host virtual machines in Microsoft Azure. The IaaS offering provides the virtualization layer that runs hundreds of Hyper-V clusters in Microsoft datacenters located around the world.

To create a virtual machine in Azure, all you need to do is click on the New > Compute > Virtual Machine > From Gallery and then create the virtual machine by selecting a syspreped image To eliminate network latency and minimize data transfer costs, you will need to ensure your virtual machines and associated components are deployed in the same Azure region rather than spreading resources across multiple Azure regions. 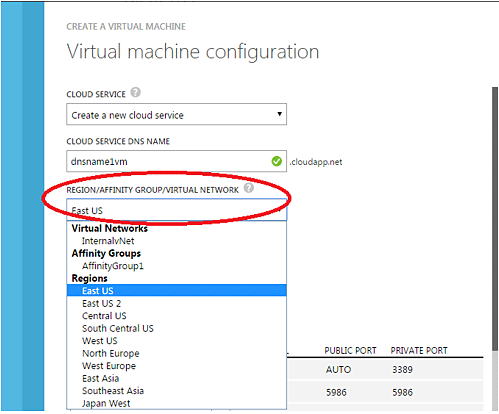 If you have already created both an Affinity Group and an Azure virtual network, you might be questioning why the “Create A Virtual Machine” page does not allow you to select both of them.

Whether to create an Affinity Group for Azure virtual machines or not depends on a couple of factors: