IBM reported its second quarter fiscal 2015 revenues on July 20, showing continued growth in the cloud segment of its business.

IBM reported quarterly revenue of $20.8 billion, for a decline of 13.5 percent year-over-year. Net income was reported at $3.4 billion, 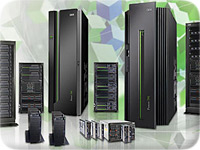 for a decline of 16.6 percent year-over-year.

IBM’s server hardware business is one particularly bright spot, depending on how the numbers are looked at. IBM reported hardware systems revenue of $2.1 billion, for a 32 percent decline year-over-year.

But when that figure is adjusted for currency impacts and IBM’s divested x86 System x business, IBM noted that its system revenues were actually up by five percent.

The System z mainframe server business grew by 9 percent without adjusting for currency, and by 15 percent with currency adjustments.

“We saw growth in both the low end and the high end where we’ve introduced new POWER8-based systems,” Martin Schroeter, SVP and Chief Financial Officer at IBM, said during his company’s earnings call. “The capabilities of both mainframe and power systems are resonating well with our customers, and we continue to add new customers to the platforms.”

Schroeter said that POWER has grown thanks to demand for scale-out systems, which are targeted at both the Unix and Linux operating systems.

Cloud a Key Area of Growth for IBM

Cloud is also a key area of growth highlighted by IBM. Schroeter commented that IBM’s cloud revenue is up over 70 percent so far in the first half of the year.

“Our cloud business is substantial and growing rapidly,” Schroeter said. “The market continues to evolve beyond pure infrastructure towards higher value process, data and analytics as a service engagements, in the same way the Internet evolved from browsing to a full transactional business platform.”