It’s a strategy AMD is exploring after acquiring SeaMicro, an Intel Atom-based server innovator, earlier this year. ARM chips are typically found in smartphones and tablets, where balancing battery life and application performance is a top priority.

Now Dell feels it’s time that the chips work their magic in the data center.

At the heart of the new system is the Copper ARM server “sled,” twelve of which can slot into a 3U chassis. 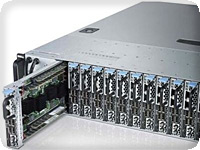 The sled provides one DIMM slot that accommodates up to 8GB per node (four DIMMs per sled), plus four 2.5-inch 7,200 RPM SATA drive bays, one for each node. Two front-facing network ports provide each node with a 1GB uplink.

The name of the game is density and efficiency, according to Christina Tiner, a product planner for Dell Data Center Solutions. All told, each 3U Copper system is a shared infrastructure — based on an existing PowerEdge C5000 microserver chassis — that can house 48 discrete ARM servers (4 per sled).

“Each of these server nodes node draws about 15 – 16 Watts of power,” informs Tiner in an online video tour of the new system. “For this entire chassis, we’re talking about 750 Watts for 48 ARM servers,” she adds.

In another video posted by Steve Cumings, executive director of marketing for Dell Data Center Solutions, he states that, “We designed this system over a year ago and we’ve had it in our labs in tests for a long time.” He adds that customer interest “wasn’t quite there” and “up until recently, ARM hadn’t really matured to the point that it had the performance required to run applications.”

That changed over the past few months, and now Dell is on a mission to get Copper into developers’ hands by getting “seed server units” out into the wild. Dell expects Copper to make a splash in Web front-end applications and in Hadoop, which has emerged as the go-to software foundation for Big Data processing.

Currently, Copper runs a distribution of Canonical Ubuntu Linux and not much else. That’s where the development community comes in.

Dell is currently shipping Copper servers to a select list of customers, including “leaders in hyperscale computing,” according to Cumings. Dell plans to grow that list and speed development on ARM by “delivering units to the open source community,” he states.