Cisco Expands UCS Server Lineup for Cloud and the Edge

Cisco today is announcing a major overhaul of its Unified Computing System (UCS) server lineup. In addition to Intel Xeon chip updates for its B and C class systems, Cisco is adding the new M-Series for the cloud and a UCS mini portfolio for edge-of-network applications.

Todd Brannon, Cisco UCS director of product management, told ServerWatch that the new M-Series and UCS mini do not replace any existing Cisco 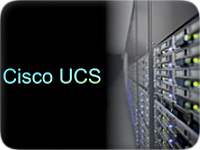 servers but rather are additive to the company’s current product portfolio.

Cisco first entered the server market back in March of 2009, with the first product being the B series blade server, and the C series rack-mounted servers followed in June of the same year. The new M-series and UCS Mini are perhaps the biggest updates to the Cisco UCS portfolio since that initial launch.

“The M-Series is a new architecture designed to optimize scale-out applications,” Brannon said. “You can use rack-mount servers for those applications, but they’re not as efficient and not optimized for those workloads.”

In contrast, Brannon explained that the M-Series modular servers are reduced components and cables, and they greatly reduce total cost of ownership for scale-out applications.

The UCS M-Series can scale up to 320 compute nodes, and the system includes both the M4308 chassis as well as the M142 compute cartridge, each powered by an Intel Xeon E3-1275L v3 processor.

The other new product in the UCS portfolio is the UCS Mini, which Brannon stressed should not be confused with Cisco’s UCS Express product. Brannon explained that the existing UCS Express product is targeted for remote and branch offices, but primarily for smaller applications.

In contrast, the new UCS Mini specializes in handling the same kind of applications you’d want to run in the data center, while giving customers the ability to run those applications in an enterprise environment.

“Another way of describing the difference between UCS Express and UCS Mini would be the ability to run a small branch versus the ability to run an entire store with multiple applications running (for example), which you could do with UCS Mini,” Brannon said.

As part of the UCS Mini server family rollout, Cisco has a retail offering it refers to as the UCS Mini SmartPlay special offer. That system includes two UCS B200 M3 servers, each powered by an Intel Xeon E5-2609 v2.